This study aimed to develop a model-framework drawn from the predominant pattern and generic sequence of ethical decision-making preferences of the middle-level school managers of Higher Education Institutions with Centers of Excellence in Teacher Education (HEIs-COETE) in the Philippines. There were sixteen (16) institutions which were the respondents, one institution per region. These were institutions with “Centers of Excellence in Teacher Education”. The respondents included the HEI-COETEs from Region I to Region XII, including CARAGA and NCR. In each of the institutions per region, the middle-level managers or the Deans of the teacher education program were considered as the respondents. The data were gathered through the ethical decision-making instrument (ERAI) of Bautista (2012).The study revealed that in terms of the predominant sequence and pattern among the 16 HEI-COETEs, in the Philippines, the predominant pattern and generic sequence were identical with the current practices. When it comes to ranking the Deans practice, the ethic of profession was topmost as it has the highest average score. When it comes to the pattern categorized with Daft’s domain of ethical management the order remains the same. It was revealed that among the 16 institutions, the predominant pattern that the respondents had chosen is the domain of ethics with the ethic of profession and ethic of community embedded in it. Last is the domain of free choice, with the ethic of care and critique. Interviews from the Deans revealed that among them, this domain also came last. Based on the results on the current preferences of the middle level managers, generally, they observed a guide, which are the basic assumptions about beliefs, values and principles used to guide choices. The ethical decision-making framework as the output of the study is inspired by the 3-dimensional pyramid figure. This system enhances the identification of the ethical framework of the managers as they are faced with ethical dilemmas. The system enclosed the five ethics which are founded and anchored based on the existing ethical and moral theories and principles. The ethical decision-making system as guided by the framework included the Daft’s domain of ethical management and other ethical theories and principles as well as the five domains of Staratt, Shapiro, Stefkovich and Furman with the five ethic and each domain encloses certain ethic. 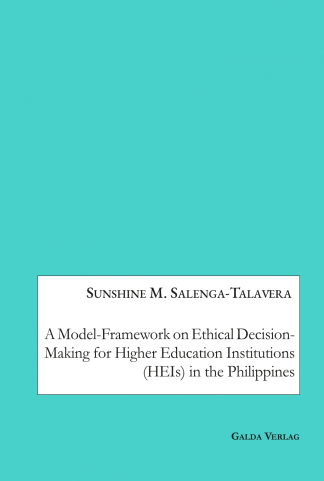