The Dogon people of Mali, West Africa, never cease to fascinate. With the spectacular scenery and picturesque villages that dominate the region, their remarkable sculpture, the frenetic mask dances and other complex rituals that underpin their lives, the Dogon region is the site of one of the most important sculptural traditions of Africa. Yet, despite the extraordinary attention that has been focused on this area, there has been a distinct lack of focus on contemporary Dogon culture and its assimilation of both tradition and modernity into the aesthetic of its numerous art forms. By focusing on the iconic tradition of Dogon masquerade, the publication, Dogon Masks in Motion redresses that imbalance and challenges the stereotypical depiction of an unchanging world so often attributed to African communities. Dogon Masks brings to life the performative experience of Dogon masquerade as a living and dynamic tradition that continues to evolve at the turn of the 21st century.

Polly Richards is an expert on the masks of the Dogon people of Mali and was awarded a Ph.D. at SOAS in 2003 for her doctorate under the title ‘Imina sanga (masque à la mode): A Study of Dogon Masquerade at the Turn of the Millennium (1994–2000)’. She was initiated into the Dogon mask society as a yasiginè (sister of the masks) in 2000. She trained and worked as a theatre designer before transferring her skills to the Museums and Heritage sector. She works today as an independent Interpretation and Masterplanning consultant. 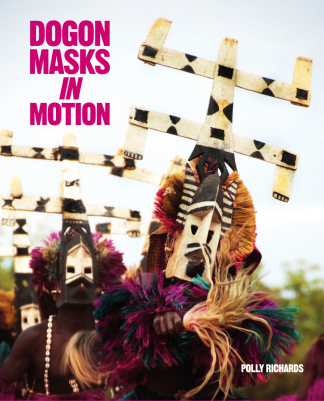