Most African countries got their independence around 1960s. Thereafter, the management of their politics was not perfect. Conflicts raised and a great number of people died while others fled to exile in neighboring countries or elsewhere. The problem of ethnicity and/ or religion was the main cause of several violent crises while some political leaders found excuses to maintain themselves on power for long.
Burundi has recently emerged from a long period of time of devastating civil war. Hundreds of thousands of people have been killed. Political negotiations at different levels led to cease fire agreements and conflicts end. The dividends of peace are visible today. Burundi troops, for the first time have been deployed in Somalia since 2007. The benefits are very important for the country, for the soldiers and their families, and for the host nation, namely, Somalia.
The disintegration of Somali political system and security order from 1991 up to present leads to internal conflict, and the lack of credible leadership. As a matter of fact, the power of the country before the AU troop’s intervention in 2007 was in the hands of Islamic Court which aimed to implement Sharia Islamic Law in the whole Somalia and its expansion in the Horn of Africa.
Burundian military leadership positively contributed to the conflict transformation with a special reference to Burundian troops in Somalia. The Burundian troops in Somalia contributed a lot for the mission. The military leadership characterized by discipline and professionalism enabled them to succeed where super power nations failed and is transforming conflict into opportunities.

Brig. Gen. G. Baratuza, a General Officer of the Burundi National Defense Force, is the Burundi Military Academy Commandant. He has a Master’s Degree in Organizational Leadership from International Leadership University-Burundi, Bujumbura on 31st October 2017, and has also Air Force Engineering Degree from Hellenic Air Force Academy of Dekelia-Tatoi, Athens, Greece in 1995. 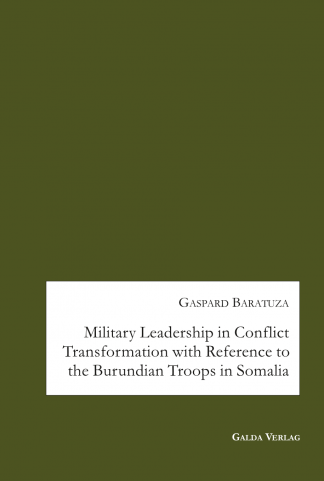 You're viewing: Military Leadership in Conflict Transformation with Reference to the Burundian Troops in Somalia (PDF) €39.99
Add to cart