A Formalistic Approach to Demetillo’s ‘Barter in Panay: An Epic’

Maragtas is popular to the students as the basis of the history of the Panay Island, Philippines, but was rejected as neither folkloric nor historical. Ricaredo Demetillo’s Barter in Panay (1961), is a literary epic and the author’s appropriation to project the racial urges and desires for freedom, righteousness, and justice for our people using the Maragtas as his source. The book presents the literary characteristics of the text as prize-winning epic. It determines the author’s literary ideology and tradition through a comparative analysis of the text and its source. Through formalistic-contextualist approach and reader-response theory, the author’s and his literary persona’s social class as bourgeois proletarian whose consistency is deemed questionable were revealed. The Filipino worldviews, socio-political, and traditional cultures are unveiled for preservation. Thus, the book strengthens the significance of Barter in Panay: An Epic in the canon of Philippine national literature.

Leo Andrew Bibit Biclar, Ph.D. is a Professor of Capiz State University. As designated Research Director, he engages in multidisciplinary researches, but specializes on Philippine folklore and cultural studies. 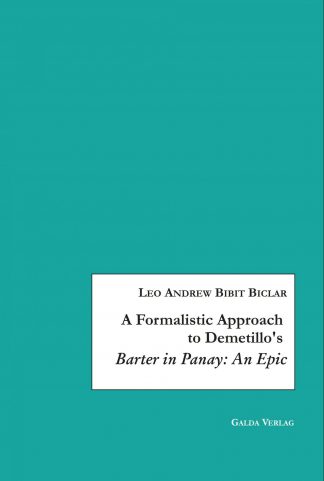 You're viewing: A Formalistic Approach to Demetillo’s ‘Barter in Panay: An Epic’ €49.90
Add to cart