The Economic Partnership Agreement between the European Union and Cameroon: An Appraisal

The demise of the Cold War made the West to engaged in exporting capitalism into hitherto parts of the globe, where this ideology was insignificant in the era of bipolar politics. This was done through a number of devices from the late 1980s. Through Structural Adjustment Programme, liberalisation policies were imposed on many countries as a response to economic problems plaguing the affected countries. For more than three decades these policies, became an embarrassment to its proponents, Other strategies came in place to ensure capitalist dogma in maintaining the global economic status quo to continue unbroken. This saw the emergence of an Economic Partnership Agreement between the EU and some countries in Africa, which Cameroon signed and ratified in 2009 and 2014 respectively. The fundamental issue in the agreement is the liberalisation of Cameroon’s agricultural and other raw material sectors to European markets in order to solve the persistent economic problems plaguing the state. This action is a continuous delusion that began from the colonial to the post-colonial eras that through such cooperation an economy at the fringes of global capitalism can break the yoke of backwardness, underdevelopment and man-made poverty arising from this same type of neocolonial activities since independence. What economic deal can be beneficial to Cameroon with a strong economic union bloc of about 28 countries? The research shows that Cameroon and any other African country, that ratified the agreement remains a perpetual abode of raw materials and agro-products to be processed in the EU and in return they purchase the processed or manufactured goods from the latter. This is further cementing the various roles that each region plays in the world economy that has made Africa to be stagnated due to the rapacious exploitation of the resources by the capitalists through these guises. 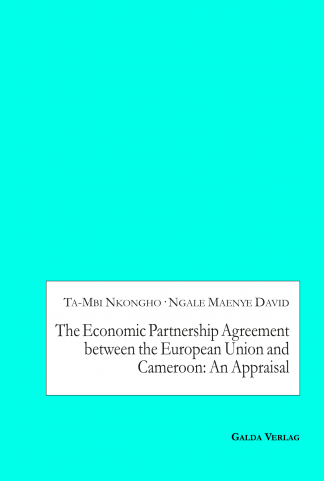 You're viewing: The Economic Partnership Agreement between the European Union and Cameroon: An Appraisal €56.00
Add to cart