The Indiaman. When the Going was Good by Land and Sea

The Indiaman was the original; the very first to offer an overland bus journey from London to Calcutta. It blazed what would become known as the Hippie Trail, along which would later travel such luminaries as The Beatles, Jack Kerouac, Allen Ginsberg, Timothy Leary and Bob Dylan. The man who spearheaded this “Nirvana Express” was Paddy Garrow-Fisher, an affable and, some thought, eccentric Irishman who, back in 1957, drove his bus-load of intrepid travellers on a tremendous 20,000 km trans-continental expedition, simply because nobody had ever done it before.

Among his pioneer passengers that year was the author of this book, Peter Moss, who took photographs, drew sketches and compiled a diary of the journey that forms the substance of this book. But Peter, aged 22 at the time, did not end his wanderlust at Calcutta. He travelled on by sea to Malaya, where he took up an appointment as a journalist with the Malay Mail, reporting on the last years of the Malayan Emergency. From Malaya Peter moved to Hong Kong, where he became a civil servant working in the Hong Kong Government’s Information Services Department, embarking on a 28-year career that ended with him heading its Publicity Division and being awarded an M.B.E.

Peter has since authored more than twenty books, including travelogues, histories, novels and three volumes of autobiography.

Peter Moss is the author of five novels and an autobiographical trilogy described by Jan Morris (Pax Brittanica) as “a marvellous achievement, both as a personal and a historical document”.
He lives and writes in both Hong Kong and Malaysia and has also earned praise for his screenplays, non-fiction works and poems. His novels include The Singing Tree (“A little gem”—New York Times) and The Age of Elephants (“A graceful, elaborate and dizzying tale of innocents yearning for home”—Kirkus Reviews). 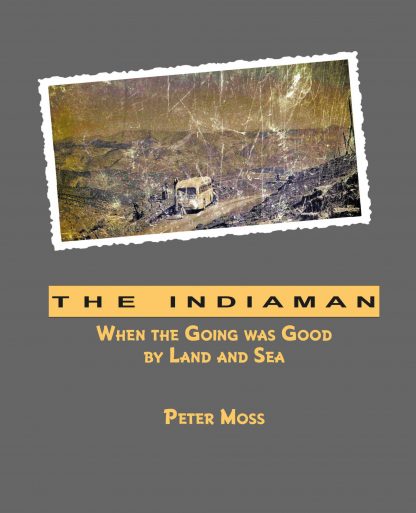 You're viewing: The Indiaman. When the Going was Good by Land and Sea €24.80
Add to cart
Manage Cookie Consent