Universal Jurisdiction in Respect of International Crimes: Theory and Practice in Africa

The crimes of genocide, war crimes and crimes against humanity are customary international law crimes. The African continent has experienced quite a number of cases involving these crimes, and the continent’s ability and willingness to prosecute offenders remains in doubt. As a result, in the past decade or so, non-African states have sought to institute proceedings against African leaders accused of perpetrating international customary law crimes. These attempts have taken two distinct formats, the
first being the use of Universal Jurisdiction (UJ), and the second being the attempts by the International Criminal Court (ICC) to indict and prosecute African leaders. The African Union (AU) has vehemently opposed both these attempts on the grounds that they are inspired by neo-colonial thinking that is aimed at stifling peace and reconciliation efforts on the continent.

Angelo Dube is a Senior Lecturer at the Department of Public Law and Jurisprudence, Faculty of Law, University of the Western Cape. He has previously served as a Law Researcher in the Chambers of Justice TH Madala at the Constitutional Court of South Africa (2008). He holds a LLD degree from the University of the Western Cape, where he lectures South African Bill of Rights, Constitutional Law and presents guest lectures in International Humanitarian Law. He has published a wide range of articles on international criminal law, comparative constitutionalism and aviation law. 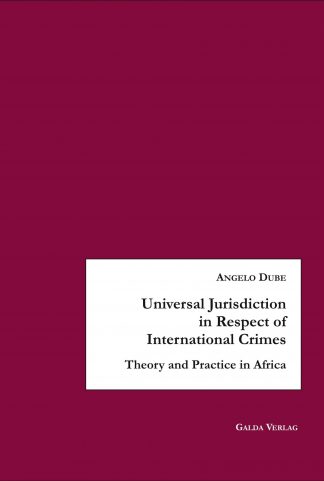 You're viewing: Universal Jurisdiction in Respect of International Crimes: Theory and Practice in Africa €69.90
Add to cart