Shores of Slaves: Apollonia in the Akan World

This book is a collection of selected author’s lectures and essays on the Nzema society and its Akan context. Some of them are updated and revised versions of essays originally published in international journals; others are unpublished. These materials are part of the output of the author’s fieldwork in Ghana, where he spent 35 months from 1989 to 2013. The book offers insights on the origin of the Nzema ethnic group within the wider Akan ethno-linguistic area, as well as ethnological and historical over-views on its main cultural features. Moreover, the book presents a critique of the famous Ivor Wilks’s “big bang” theory of Akan history, and an analysis of the local ideas on history, economy and social life.

Mariano Pavanello (b. Venice, 1944) is an Italian Ethnologist. He carried out fieldwork in various African contexts for forty years spending in the field more than sixty months from 1973 to 2013. He taught Ethnology, Cultural Anthropology and African History in the Universities of Pisa (1978-2004) and Rome “La Sapienza” (2005-2013) where he was Chair of the Department of History, Cultures, Religions from 2010 to 2013. He authored many essays published in international journals and many books among which Il formicaleone e la rana (Napoli: Liguori, 2000); Forme di vita economica (Roma: Carocci, 2000); La papaye empoisonnée (Saarbrücken: éditions Universitaires Européennes, 2017); The Gender of Debt (Newcastle u/Tyne: Cambridge Scholars Publ., 2019). He also edited Le forme dell’economia e l’economia informale (Roma: Editori Riuniti, 2008); Perspectives on African Witchcraft (London, New York: Routledge, 2017). 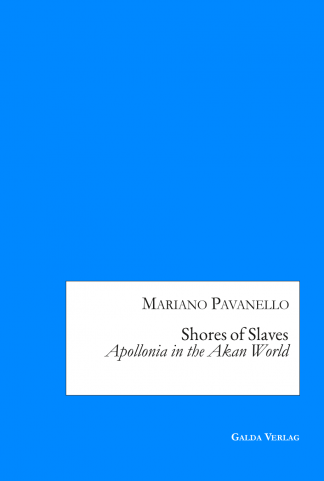 You're viewing: Shores of Slaves: Apollonia in the Akan World €72.00
Add to cart
Manage Cookie Consent