This book volume engages the emergent ways and exercises of world-making in eastern African literatures and cultures. It also includes how the world comes to eastern Africa as well as how eastern Africa speaks to the world. Writers within the region have come up with novel commentaries on diverse social issues. Artists and other users have invented new forms of expression through digitalization. The structure and content of this literature and cultural conversations, in line with modernity, has exhibited a fluidity that calls for the critical appraisal carried out in this book.
Therefore, this book volume centralises the emergence of new patterns of engagement in the literatures and cultures of the region. Taking cue from the cultural transformations, technological advancements and political influences, the volume raises questions on politics, conflict and war, and the evolving genres and canon. The book crosses language barriers beyond English and includes critical attention to texts written in the Swahili and French languages. The chapters aim to give a broad overview of the writings and cultural expressions in the eastern African region, including novels, films, short stories, theatre, poetry, oral, and digital performances.

Introduction: An Overview of Trends in Eastern African Literatures and Cultures
Oduor Obura

Part One: The Evolving Literary Canon

A Discipline under Siege: Interrogating the Place of Literature in English in the Secondary School Curriculum in Tanzania
Obala Musumba

Cartographies of Killing: Transnational Drones in Eye in the Sky
Jana Fedtke

Agony on Stage: The Intrigues of Building Houses in The Rubble Rouser, performed at the 58th Edition of the Kenya Schools and Colleges Drama Festival (KSCDF)
Pepetual Mforbe Chiangong

UWARIDI Initiative: The Innovative Transformation of a Self-help Project by Tanzanian Novelists into a Powerful Literary Space
Uta Reuster-Jahn

Susanne Gehrmann, PhD, is Professor of African literatures and cultures at Humboldt University, Berlin. She holds an MA in Comparative Literature from Sorbonne Nouvelle (Paris 3), an MA in Romance literature from the University of Bochum and a PhD from the University of Bayreuth. Her main research areas are francophone West- and Central African literatures, autobiography studies and intermediality. She has co-edited „The Ubiquitous Figure of the Child Soldier. Interviews with African Writers, Academics and Cultural Activists followed by a Comprehensive Bibliography“ (2019) and „Créativité intermédiatique au Togo et dans la diaspora togolaise“ (2015).

Obala Musumba holds a PhD from the Institute of Asian and African Studies, Humboldt University in Berlin, Germany. He studied at Kenyatta University, Kenya where he graduated with an MA in Literature (2010) and a B.Ed (Arts) (1998). He has published on Children’s Literature, Life Writing, and the African novel.

Oduor Obura is a PhD holder from the University of Potsdam, Germany. He obtained his MA at Kenyatta University, Kenya. He has research interest in eastern African cultures and literatures. He has been a part-time lecturer at Moi University and Rongo University in Kenya. 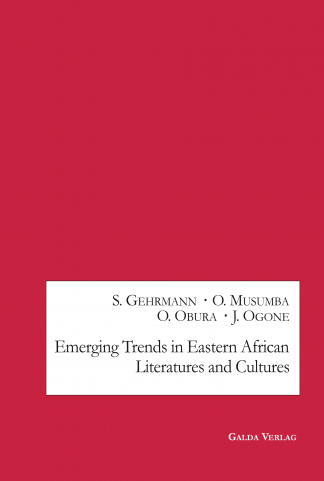 You're viewing: Emerging Trends in Eastern African Literatures and Cultures €59.00
In den Warenkorb